Yes I believe it; Racism is Alive 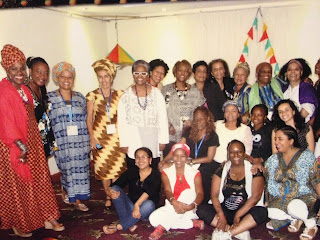 Yes I believe it; Racism is Alive


I have been sitting with this Reflection for more than a week as I worked through my emotions from recent events and my trip to Santo Domingo.
My opening line was my exchange with the waiter at breakfast, my first morning in Santo Domingo. As I sat with other hermanas from the Red de Mujeres Afrolatinamericanas, Afrocaribeñas y de la Diaspora, with my African dress and head wrap, he looked at me and called me an Indian Queen and I had to correct him and say, Thank you, no, I am an African Queen.
In understanding what this exchange means to the country I was sitting in, I believe what is happening with the Dominican Republic Constitutional Court ruling and what happened to 7 year old Jakiyah McKoy, tells us, racism is alive.
Jakiyah McKoy, lost her crown in the Little Miss Hispanic Delaware contest when her parents could not provide proof that she was ‘at least one-quarter Latina.’  The family states that her grandparents were Dominican.
After seeing the picture of this beautiful young girl, most who know of the racial identity crisis in the Latino community, knew this happened because Jakiyah is visually an Afro Latina. I say visually because our work has taught us to not assume that those who are visually Afro Latinos identify themselves as such.
The Dominican Republic Constitutional Court ruled to “retroactively alter the criteria for citizenship under the constitution for those born to foreign parents between 1929 and 2009--a decision which could leave hundreds of thousands of Dominicans stateless.”


Both incidents bring to light an internal and external conflict that exists in the Latino community. If you know the Dominican Republic history and the use of words to identify self, then you understand why he reached for the word ‘India’ first. In 1937 Dictator Rafael Trujillo ordered the killing of 20,000 Haitians in five days. This was his response to reports that Haitians were stealing cattle and crops.


When 7 year old, Jakiyah McKoy’s crown was stripped from her because she could not prove she was a Latina, the crisis hit a low point. One, marking this child for life and two, saying out loud, Black is not Beautiful or Latina enough.


In our trainings and presentations we stand before those who cannot see their Blackness or identify it because many have not had the conversation. For a long time, we have been naming our racial identity as our cultural and ethnic identity and doing everything to stay away from that sentence that I stand proud to say, Yo Soy Negra, I am Black.


These deeply rooted acts of racism continue to exist in our community, in our society, it is time for all to believe that racism is alive.
Now that we got that out of the way, what are we going to do about it?
I say WE because this is not a DR-Haiti problem. It is a problem of each Afrodescendent when a country plans to remove hundreds and thousands of CITIZENS, stating it is a migration issue when, based on the history of the country and its relationship with Haiti, racism is at the core of the decision.
We need to name it people! When those who chose to act on it in such violent ways, we need to name it, loud and clear.
I just got back from Santo Domingo to participate in the Forum of Feminist Organization, Assembly of the Red de Mujeres Afrolatinoamericanas, Afrocaribeñas y de la Diaspora and the CEPAL XII Conference on Women.
On the first day of the Forum of Feminist Organizations, some of our sisters walked around with t-shirts that said, “Todos Somos Haiti, We are all Haiti.”


At the end of the Forum a statement was released supporting Dominicans of Haitian descent and the sisters in the struggle.


On the first day of the Assembly of the Red de Mujeres Afrolatinoamericanas, Afrocaribenas y de la Diaspora, our hearts and minds where on this ruling that violates the human rights of Dominican citizens.
My Diaspora presentation was dedicated to Sonia Pierre who fought very hard for this ruling to never come to fruition. She knew what the numbers would be like and she knew the impact on a community that has only called Santo Domingo home. Sonia herself would be one those affected by this horrible ruling.
As we moved through the Assembly we knew it would be important to have our voices heard. The opening of the Declaration of RMAAD states; “CONDENAMOS por unanimidad,  la desnacionalización a miles de dominicanos y dominicanas emitida en la sentencia del Tribunal Constitucional en un documento que viola principios fundamentales de los derechos humanos establecidos internacionalmente.


“CONDEMN unanimously thousands of denationalization of Dominicans issued in the judgment of the Constitutional Court in a document that violates fundamental human rights established internationally.


We considered that the events constitute a serious violation of rights and an abuse of the Dominican population of Haitian descent which were born and raised in the country, having no living links with the neighboring country of Haiti, given that this group of people have suffered the impact of the colonialism, expressed in levels of poverty and social fragility, affecting mainly women, children and youth.”
During a down time, a few of us went to the supermarket. As we stood waiting for one of our colleagues we kept looking around. We all looked at each other with teary eyes because all we saw was Black people, beautiful Black people. All we kept saying on our way back was this is a Black Country.


The Dominican Republic/Latino identity sentiment is also here in the US and creates a deep struggle of identity amongst our youth, who like Jakiyah, will face a hard and sad reality.


‘Negro’ is not a word used in Santo Domingo, unless in a negative way and only associated with Haitians. The other time you hear the word is by those Dominicans who are proud of their Black identity.


It is time to address this issue, time to sit and really work through the pain that we see on the faces of the young women and men that we work with in our HER and HIS Project. This issue has caused and continues to cause a deep level of pain in our community.


When one of the young girls in the HER Project shared, “Ms. It has taken me a long time to say I am black because I grew up feeling bad because it was associated with Haitians. My mother helped me when she said; there is nothing wrong with being black.”


I made a promise after Sonia made her transition that I would continue to speak up on the issues she fought so hard for. She fought for this one because this one would affect her and her children. She loved this country even though, it rejected her.


Black people everywhere should be standing with our Dominican brothers and sisters who are being treated like criminals for being Black. If we stand by without raising our voices then we are saying as a people, as a community, as a society, that we are allowing this pain to sit within and that we will turn the other cheek unless it is affecting us directly. This is about US so it is time to take care of US.


In peace and light,


Yvette
Posted by Encuentro Diaspora Afro: Reflections from the African Diaspora at 10:45 AM