An Afro-Latina experience in Cartagena, Colombia and flying Avianca in Business Class 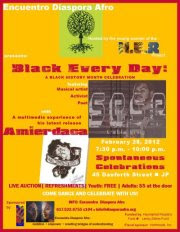 My reflections are inspired by real stories, real incidents. We are a few days away from our Black History Month event, BLACK EVERY DAY!!

The name was inspired by reflecting on the year that was assigned and the month given, we as people of African descent, Black Peoples, cannot choose to ignore our blackness and the positive and negative incidents that come along.

I was going to write something after our event but then my sister shared this with me. My sister’s experience speaks to the theme of our event. We can do our best to go through the day without over thinking our every move and the reactions to our presence. Yet, moments like these come up and as you will see from my sister’s experience, in her own words, it shakes you to your core and you cannot help but feel the pain. I kept it raw because it speaks to the emotions of the moment. She began to write this immediately after the incident on the flight. A true Modestin moment, I am so proud of her!!!

An Afro-Latina experience in Cartagena, Colombia and flying Avianca in Business Class

WHOA!!!!!! My trip from NYC to Bogota left at 1pm. For those of you that don’t know me, I’m very vain when it comes to my hair:) On the early morning trip, I wrapped my hair. Upon my arrival to Bogota, I revealed my long shoulder length un-relaxed hair. At this point, the flight attendant gave me the acceptance look.

Bogota was the first place I have visited, that upon arrival, I was addressed in Spanish without hesitation. I guess my natural blown out hair made me look Latina. The city of Cartagena was just wonderful. The people are very helpful and forthcoming. I stayed with some of my co-workers at a bed and breakfast called Hotel Casa La Fe. It was a very quaint hotel with a great staff. The two days of partying leading up to the weeding day were marvelous. It is important to mention that I was the only Afro-Latina attending all the events.

On Sunday, afternoon, I began my trip back home. I took a flight from Cartagena to Bogota. I had a seven hour layover in Bogota. My co-worker and I toured the city. It was a great seven hours. Finally time to board the plane home.

I was assigned seat 5J. I thought I was in the correct seat until the flight attendant came to inform me that I was in the wrong seat. The woman assigned to seat 5K, choose to not ask me to move seats; she went to get the flight attendant. The person in 5K could not wait for me to move to seat 5J. When I got up to move and trying to get my bag , the woman decided to throw her bag over to her assigned seat. I guess she wanted to make a point that that was her seat. She seemed very annoyed about me sitting next to her. She huffed and puffed when taking out the bed.


The flight attendant at this point was also being very racist. As we prepared for takeoff, the flight attendant proceeded to ask everyone for their coats, so she could hang them up. I waited for her to come to me. She never did. I had to ask her to hang my coat.

The next revealing incident was around drinks. I had an aisle seat. Why are you offering a drink to the person sitting in the window seat first? Is it protocol or is it another racist act?

Finally, the captain announced that we were arriving to NYC. The woman in 5K decided to get up and get her overhead luggage. The luggage sounded heavy. The flight attendant came to her aid. I moved my head because I felt that the luggage could fall. Nor the woman or the flight attendant seemed worried. She spent the entire flight huffing and puffing. We finally exit the plane. Yeah!!!!

You might be asking yourself, what did I say or do. I said nothing and did nothing. I knew that if a ruckus had occurred, it would have been the “Negritas” fault. It is bothersome to me that in 2012, White Latinos still live by an entitled mindset with slave mentality. I have the right to be in business class. I have the right to travel with comfort. They were empty seats, she could have moved. Instead, she decides to make this one of the most uncomfortable flight I have ever taken. This painful experience will also be a reminder that we can hope to move with ease but they are those who move with negative and hateful intentions.

Peace
Michele
Posted by Encuentro Diaspora Afro: Reflections from the African Diaspora at 10:08 AM