Amierdaca, What Kinda Country Is YOU?: A “Black Every Day” reflection by Sese of Treble Army 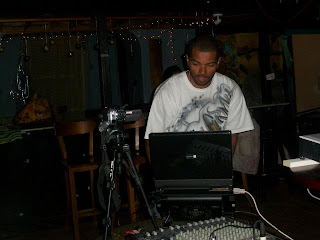 Amierdaca, What Kinda Country Is YOU?: A “Black Every Day” reflection by Sese of Treble Army

Without having rapped a single word, this was the first reaction to what I had to say in Boston. A young sister from a class at English High was referring to my accent in the middle of a conversation I was starting about the erasure of our people's memory. I prefer having this particular discussion with youth because it brings to light that the United States power structure imposes certain cultural and political puppets onto us as “leaders” (though these puppets have no direct influence on our daily lives except for being on the channel zero media day in and day out) while intentionally repressing the historical and present sisters and brothers who have fought for African liberation through the provision of basic human needs like food, clothing, shelter, medical care, and education.

America, what kinda country is you? What kind of country imprisons, exiles, and murders freedom fighters that implemented free breakfast for children programs, then steals those very same programs and renames them Head Start, and finally makes the heirs to the freedom struggle (African youth) see the true freedom fighters as somehow “bad” and “violent” as you drown them in Wendy Williams?

The conversation at English High got real when we weaved into the subject of Tupac Shakur, which catapulted us into a discussion of his mother Afeni and her Black Panther comrade, Assata Shakur. Assata's story resonated with these young sisters, and they came to not only identify with her story of revolutionary action, underground existence, and exile, but they also defended her and stated that they would never tell on her for the U.S. government, no matter how high the reward. When asked why they are not told about sisters like Assata by mainstream media and institutions, one of the students pointed out that, “'Cause if we knew about her, we'd want to be like her.”

Which is exactly what we need. Those young sisters ARE the ones who must continue the struggle for transformation of the entire society in which we live. And WE, as those with information derived from study and experience, must consistently engage their thoughts and actions towards that end. (I would first suggest we develop a semester-long curriculum that starts with the work of Assata Shakur and Safiya Bukhari, and expand from there.)

As time inched closer to the event, a train ride turned into a shouting match between a high-school age African brother and a 50-something white dude, which then devolved into fisticuffs, which immediately deteriorated into a contest of who could hug the other in the most hateful way. Others on the train might have characterized it as a fight. Scenes like this are multi-layered, but for me emphasized two things that I'll cite here: an oppressor-imposed meaning of manhood that causes males to view life in terms of aggression and empty terms like “respect/disrespect” (concluding in a U.S. empire built on hyper-aggression viz a viz land theft, mass genocide, enslavement of people, patriarchal subjugation of women, normalization of physical violence in the mass media and social life, military conquest domestically and abroad, etc.), and the larger twist that we are all in: fighting each other in horizontal skirmishes while fat cat oppressors who control our survival and perception sit on high on Wall Street balconies, Pentagon swivel chairs, and Tinseltown boardroom conference seats just laughing at us.

America, what kinda country is you? What kind of country inculcates violence in its population in service of capitalist domination, using the male species as its foremost vehicle for the physical manifestation of this violence to the detriment of all? What kind of country revels in how much people can hurt, destroy, and dispossess others who are just as enslaved to the pay-to-live standard of dying as they are? Amierdaca, that's who.

But, no need for defeatism, for some of the seeds to the neccesary restructuring of Amierdaca find fertile ground in intimate spaces of productive learning and mutual exchange of experience, such as the Black Every Day event. Community folks of all ages came out, and through poetry and music we all elevated expectations of ourselves and the work that must be done daily to change conditions and relationships on this planet from exploitation to sustainability.

Keeping ourselves to this standard will ensure our victory over the forces of global domination. And we will be the ones who decide, Amierdaca, what kinda country you is.

Treble Army is comprised of Latido and Sese. Latido handles engineering, mixing, recording, and production. Sese produces and raps. The group has been making music since 2007, and their formal releases include The Recruitment (2010) and Amierdaca (2012). Our music is a weapon in service of people's liberation from imperialist hegemony and all the oppression that grows from that. Our responsibility is to agitate our people towards decisive actions that will release us all from the capitalist terror we endure daily.

For more exposure to Treble Army:

If you like what you hear, please write a review of our music on any of the sites you visit. And, without hesitation, please spread the word about our music. Look out for the Amierdaca DVD including music videos for every song from the album coming soon!
Posted by Encuentro Diaspora Afro: Reflections from the African Diaspora at 4:39 AM