Know Thyself – Descubrete! Dedicated to the Young Women of the Hermanas Exchanging Roots (HER) Project of 2017-2018 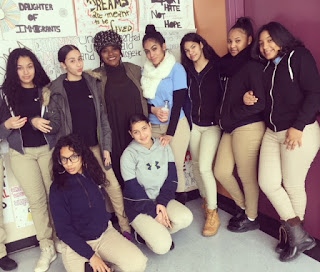 There is a lot of noise in the world. It is almost impossible to not get pulled into the daily racist, white supremacists statements. When my Sistren Chioma shared that there was a slot left in the ‘BBnB’ Women of Color Writing retreat I said, YES, immediately. Not only to write but to pause and get away from the noise.

The day before the retreat, I was one of the storytellers for the WGBH/PBS show; Stories from the Stage. It was an unforgettable experience on many levels. The story I shared was my first time venturing off campus and facing the ‘I thought you were Black, you don’t look Panamanian’ exchange. I realized in preparing to stand on that stage, that the pain and sadness from that moment is still a part of my movement. It is a daily trauma, a constant kick in the stomach that makes you rise up ready to fight for your space and your full voice.

This same incident happened a week before preparing for the show. This has been the ongoing narrative since I have been in Boston. As I reflect on the experience of the show, 2017 and our current affairs, I arrived at this place that it is not enough to talk about it; we need to go back and fetch it, Sankofa, to truly find ourselves and see our commonality. Once we arrive at this place, we need to tell our stories in our own way, using our own words that might not make sense to many who pretend to understand our journey including those who look like us.

I dedicate this to the young women of the HER project of 2017-2018. In discussing black history, I realized that they only know about Malcolm X, MLK Jr. and Rosa Parks. They only know the accepted white washed narrative that makes them safe as black leaders and activists. This is a major step for these girls. They have been moving through life as White Latinas with Black experiences. They don’t have the words or the history to validate these experiences.

When I showed the film ‘Scattered Africa’ by my mentor Dr. Sheila Walker, I saw the amazement in their faces when they heard the numbers of Africans brought to the Americas. I saw them sit up when they heard their country mentioned. I then shared the process of the program which strives to create a space for identity formation and leadership development. Two of my young women asked me, Can we learn more about Africa? Can we learn more about the trans-Atlantic slave trade? I was moved by this ask and their willingness to challenge what they have been taught and what they hear on a daily basis in their homes and in their community.

Together we are going back to fetch it so that we can know thyself on a deeper level.
Moving in this direction with this group of young warriors, led one of them to say to me, ‘Ms. Yvette I feel bad about the way we speak of Haitians.’ She then shared that she got into a disagreement with her family about the push for deportation of Dominicans of Haitian descent and how this is the same as them fighting as Americans of Dominican descent.

In my own reflection of these conversations with my girls, I realized that I failed my baby, Encuentro Diaspora Afro. I failed it because as I was growing deeper into my identity, my light as an African, I did not bring it fully along with me. I wanted it to fit into this Afro Latino identity that still over emphasized this need to be invited to the colonizers table. That is no longer a priority of mine. Nina Simone said, “You have to learn to get up from the table when love is no longer being served.”  If your love for my blackness, my Africaness is not present, then I do not need to share space with you. Afro Latinos stand loud saying, Soy Afro Latina, but do you see Africa in that? It is time to ask, what is most important to you?

My experience filming ‘Cimarronaje en Panama’ allows me to stand with complete confidence saying, Colon is Africa.  It is in the movement of the people, the voices, the smell and the love. Yes, the region is mixed but how many of us speak of our ancestors as enslaved Africans and not something outside of ourselves.

One of the many gifts of 2017 was the founding of Regional Council of Africans in the Americas (RCAA/ARAAC). As one of the co-founders with Jesus ‘Chucho’ Garcia and Damani Aaquil this space mirrored my movement by placing Africa in the center of the Latin American and Caribbean experience. Encuentro Diaspora Afro has joined this drum beat.

The drum beat was extended in such spaces as National African American Reparations Commission (NAARC), #40 Acres and More (Reparations Strategy Group), the Boston Coalition for Freedom and the ongoing work of the Red de Mujeres Afro (RMAAD).

I give thanks to the young women who are daring to join me. I say ‘daring’ because when your eyes, your heart and mind are open to this truth, you will react to anything being said about any person of African descent that could mean a level of sacrifice that no one prepares you for.

It is important to also give a shootout to the young men of the Hermanos in Solidarity (HIS) Project. After seeing the film I shared something Mr. Richards, my mentor in Panama shared with me. He said, ‘we were not dropped off as a family. Your father was dropped off in Jamaica, your sister in Haiti, your brother in Panama and your cousin in Ecuador. One of the young men out loud said, ‘that’s deep.’ He then said, so that means I could be related to you Ms. Yvette and I said, Yes, he then said, that is really cool.’ If you pause, like the young women and young men of project did to truly understand that statement then you can feel the need to know thyself, to go back and fetch it.

I closed out 2017 standing with Black women/ African women from NAARC, #40 Acres & More and community organizations that stood together reading the statement that highlighted 350+ years of being viciously raped during the enslavement era and beyond. It was powerful. We followed that up with a ‘Sistahs Statement’ following the elections in Alabama that spoke to us always having to ‘show up’ not to save others but to take care of ourselves. All of this fed the warrior/Ogun in me.

I fell in love, deeper in love with the spaces I entered and with the men and women that gave me room to exhale. I also began sharing my Yoruba name, Lepolata Aduke. This was important to me. It was another expression of being unapologetically African.

My ‘loc’ journey which I started on my mother’s birthday is also about embracing this African light. The reactions have been interesting. Even those who say they are ‘Woke’ carry a European standard of beauty that says this is not attractive; this is not clean and professional. It has been revealing of my own sense of beauty.  I love the way it sticks up one day, I love the way it feels when it’s fed water and gets kissed by the sun. I love the way it is doing its own thing. It is an extension of me. Doing my own thing, my spirit keeps rising with a grounding smile.

My identity has led my purpose and my purpose has filled me with a love that at times I am not able to really express to you. To be honest and vulnerable in this reflection, it has not been easy. It is exhausting yet; I am willing to commit to these young people so that in some shape or form they will be better prepared to respond to this racist, white supremacist noise both externally and internally.

As Encuentro Diaspora Afro, the young women and young men of the HER and HIS Project join me to a deeper journey of Knowing thyself, I ask you to join us on this journey. Our campaign, our song for 2018 will be Know Thyself, Descubrete! We will go back and fetch it and hopefully land in a place that will have all of us rising to this synchronized song, I am an African in the Americas.

Ifa teaches us that our Ori (spiritual head) leads our journey and opens the roads for all good things. May 2018 bring us clarity and ground us in our African light. May we tune out this racist, white supremacist noise. May we continue building together and sitting at the table with love. May we find each other, see each other and embrace each other in this New Year. Ase!

Posted by Encuentro Diaspora Afro: Reflections from the African Diaspora at 9:53 AM


I am Alecia,from what I can read. It has been sad news and scam to everyone about Voodoo casters or so. But to me they are so real because one worked for me not quite long ago.i met this man on a blog his name is Dr Abalaka is a very powerful man.I traveled down to where his shrine his and we both did the ritual and sacrifice.he had no website yet but he promised to create one as costumers are requesting for it, and now i'm free from the powders of sickness.I don't know about you but Voodoo is real;love marriage,finance, job promotion ,lottery Voodoo,poker voodoo,golf Voodoo,Law & Court case Spells,money voodoo,weigh loss voodoo,diabetic voodoo,hypertensive voodoo,high cholesterol voodoo,Trouble in marriage,Barrenness(need a child),Luck, Money Spells,he also cure any cancer and HIV,it's all he does. I used my money to purchase everything he used he never collected a dime from. He told me I can repay him anytime with anything from my heart. Now I don't know how to do that. If you can help or you need his help write him on (dr.abalaka@outlook.com) and also his cell number: 760-935-3804 you can text him because he use to be very busy some times,i believe that your story will change for better,or if you have any question you can contact me here as 1001madonado@gmail.com best of luck.