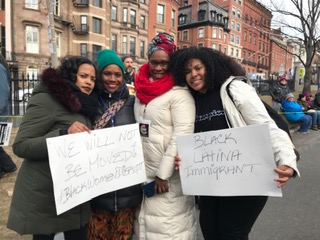 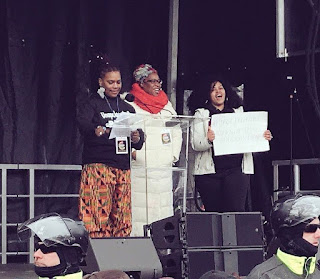 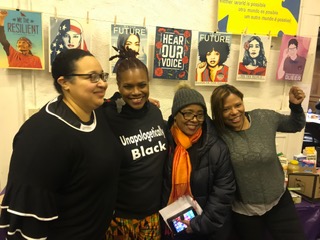 January 2019
The year started with me jumping up and down on the stage at the Boston Women’s March.  Chioma, Vanessa and Rocio joined me on stage to say, ‘We are here’ Presente!
I walked on to the stage and spirit took over. We were jumping up and down. It was great!
We disrupted with truth and used every minute we had to speak on behalf of Black women, Black immigrant women, women of African descent and all the Guerreras and Cimarronas, whose shoulders we stand on.
After receiving the first ‘Every Woman Activist Award’ from March Forward Boston, this was an opportunity to share out loud why the conversation on women’s rights is not complete if Black women are not part or included in the conversation. We will create building our own spaces but know that when you invite us to the table we are not coming alone.
I give thanks for the recognition but the message became more important.
This unapologetic light was grounded in the knowledge that my Blackness is my center. It is where I find strength, clarity and peace. What a year it has been grounding in this truthful light.
Thank you to Janet Santos and the #Boston Women’s Fund for inviting me to speak at the Women’s March Breakfast. Here is to new beginnings!
#unity #inclusion #2019BostonWomensMarch
https://www.wcvb.com/article/womens-march-held-in-boston-common-but-tone-different-from-years-past/25963645
Boston Women’s March Speech 1/19/19

I rise up in the spirit of Harriet Tubman, Maya Angelou, my mother, Audre Lorde, Victoria Santa Cruz of Peru. Sonia Pierre of Santo Domingo, Berta Cáceres of Honduras and Mireille Franco of Brazil.
I stand here in the spirit of Black women, African American women, low income women, black women activist and gentle warriors who are at the center of this movement who wear their crown fearlessly.
I Give light to our African sisters and mothers who have died fighting for liberation.
I stand her in the spirit with my young women of the HER Project.
Digo Presente con la luz de mujeres negras, mujeres afro, afro latinas de latino America y el Caribe.
I stand here with the light of all the soulful men, black men, brothers, hermanos who join us on this call.
I stand here in the spirit of my sisters, hermanas who are here to disrupt for real change to happen.
I stand here unapologetically Black

Queens
Mi reinas!
Stand strong in your space
Know your worth and dance in it
Shine in it
Break down walls in it

I’m a black woman in this world

We are at a crucial crossroad, women, all women, women of color, allies to sit at the table and hear each other and build together
build together while making sure that no one is left behind
No one is above anyone
No one is seen less than
And specifically that black women, African women, black latinas are seen in their human light, in the righteous light, in their magical light.

I believe that those that look like me that come from that same fabric, that same root should have the best of the best wherever we are standing and whatever language we speak.
We will continue to fight for that and speak truth to that because that is love, that is what love looks like.

I love this skin, I love the story that comes with this root, my tree has been shaken hard but not broken
We are Under attack and still rising with love, pain and resiliency 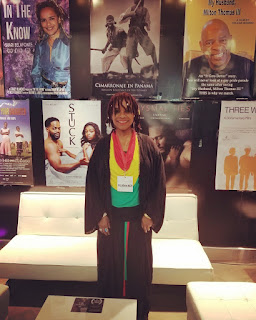 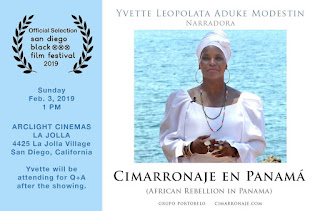 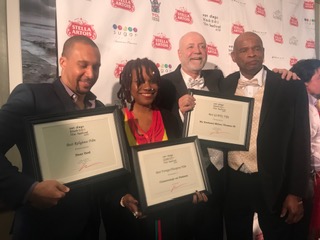 February 2019
For 10 years I worked closely with Toshion the film, ‘Cimarronaje en Panama.’
A family and a bond was built out of this genuine loving energy. I will forever be thankful to Toshi for brining me along with him and for introducing me to the people I now call familia in Portobelo. This space, these people, have become my grounded, regrouping space. I love them so much.
Going to the San Diego Black Film Festival on behalf of the film was truly an honor.
The unforgettable moment on this stop was at the award ceremony. I was sitting at the table where Best Short Film won and Best LGBTQ story film won. As they began announcing the nominees for Best Diaspora Film, my heart was beating a mile a minute. Those that saw the film loved it and made it a point to come up and share their joy with me. I kept hearing, ‘every Black person, African should see this film. This is about all of us.’
When the announced Cimarronaje en Panama as a winner, I jumped up with the spirit of that 15 year old athlete. I was so happy for Toshi, for the film, the people of Portobelo, all those who took the time to be a part of this historic project
It was a labor of love for Toshi. It deepened my love for my #African #identity and made me fall in love with #Panama all over again. Every trip, sun burn, all of it, for 10 years was absolutely worth it.
It was truly an over the top joyous moment to hear the nomination and to hear that we won. I wrote this on Facebook that day. ‘OMG WE WON! Best Foreign/Diaspora Film at the #SDBFF. Congratulations Toshi! Thank you for inviting me to join you on this life changing journey. Much love!’
This will be the one of the highlights of 2019 but it will also be one of the highlights and great teaching moments on this journey.

Posted by Encuentro Diaspora Afro: Reflections from the African Diaspora at 10:34 AM